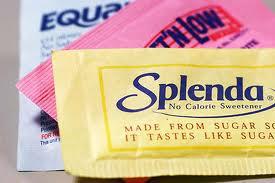 Erythritol or ZSweet, found naturally in some fruits is harmless, absorbed in the intestines so it doesn’t have a laxative effect.

Harmful:
Xylitol: Unlike erythritol, these other sugar alcohols are not absorbed, so they draw fluid into the colon and can have a laxative effect.
Aspartame: Linked to hypertension among other things.
Sucralose or Splenda: May play a role in triggering migraines.
Saccharin: May cause bladder cancer.
Acesulfame-K: Linked to DNA damage in 2009.
Cyclamate (still legal in Canada, but banned 43 yrs ago in US).

What about Stevia aka Truvia? Looks like there’s still debate on this one as to whether it’s potentially harmful or not.

Looks like Erythritol, to our current knowledge, is the safest choice!