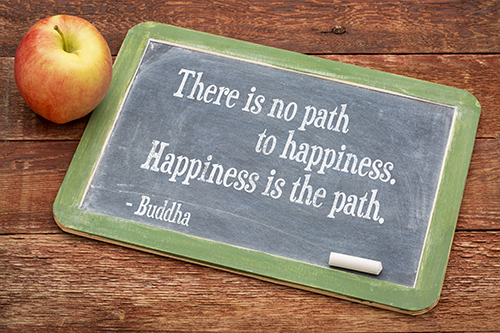 The older I get, the more I truly learn how to follow my heart.

But following your heart a lot of the time is not easy. Reason being, is there is so much that gets in our way. At age 32, I’ve awakened more and more to the realization that I am often programmed to perceive certain things based on what I think is the “right thing to do.” A lot of times, this “right thing to do” is not what feels exciting or good to me, and I’ve almost subconsciously chalked this up to just being a responsible adult.

While there ARE things that we have to remain responsible for that we may not want to do but are necessary (that IS being a responsible adult), there’s also another side of this that I believe comes from taking actions almost based on a mistrust of myself or possibly some kind of fear — but also not consciously.

Its basis is on the idea that if I don’t follow a certain path, that I might fail at life, or end up broke and on the streets, or let down others, or miss out on some connected opportunity. I’m not sure which it is, because I don’t really intellectually believe these things. It’s not something I think about, but rather something that was taught and programmed into my mindset.

The truth is, many of us have this same programming. It stems from the idea that we need some authority figure or some structure in order to keep us working hard or doing the right thing, like we are inherently wild animals with no moral compass without someone always keeping us in check or leading the way. It’s almost like the system was designed specifically based on the fact that people cannot function like a decent human being by their own will (hey, maybe some can’t…), but it’s not a one-size-fits-all strategy. There’s always someone teaching us how to learn, or teaching us which path to follow to ensure success, and punishing us (albeit possibly indirectly) with an air of disapproval if our life paths look drastically different than others’.

We don’t realize it, but without constant external validation that we’re doing what we’re supposed to or what’s considered normal, many of us might feel lost (maybe we haven’t really grown up at all, have we?).

Our whole lives, this is what we’ve had. People telling us what to value. School. Society. The status quo. Peers who are all achieving different things but going about them via a similar path. We don’t really learn to listen to ourselves at all except for when it comes to asking ourselves what we want to do for a living. And even then, the answer is often purely a result of influence from other people or some kind of reward we get for the accomplishment. As humans we crave community, to be a part of something, to be RECOGNIZED as something, and this can take precedence over our own true feelings until we forget how to listen to those entirely.

So even if we don’t believe in black and white ideas of punishment and reward, sometimes we automatically think that way. We punish ourselves if we don’t meet our own expectations that are coming from things we have been taught, and this can subconsciously guide our actions in life. We might always be trying to fit ourselves within a box or a path that gives us some sense of satisfaction, but no lasting happiness, joy, or peace.

We may not know what true happiness or peace feels like (if we’re locked in the cages of our minds our whole lives, we are accustomed to that as our only reality).

What we might have though is a nagging voice, a consistent lack of energy, a yearning for more but not knowing where it’s coming from, until we take a good look at why we’re doing the things we’re doing. And even then, sometimes we might not even have an immediate answer, or one that truly comes from within ourselves.

My new life path, therefore, is on pursuing joy. Rather than analyze my “why” with reason and logic, I am learning to do so with feeling and senses. I encounter a situation and I think, how does this make me feel? Do I feel incredibly excited about this opportunity? Or do I feel a sense of hesitance that comes along with “I SHOULD do this but I don’t really want to.”  If it’s the latter, in most cases, I am learning to say no. But it isn’t always straightforward, because I’ve participated in things I “should” be doing basically my whole life. And sometimes it takes some experimentation to see where something really leads.

But in general I’m learning to look for something that makes me FEEL something. One that gets my creative juices flowing. Because I know that the world will benefit from that much more than anything else I might do, and because I value having my own mind over almost anything else. Over having a mind that really is just a product of others’ opinions and methods.

It’s about learning to trust yourself.

All in all, I know I am a solid individual with good intentions. I’m empathetic. I’m reliable. I want to give to the universe first, I want to help others. I’m responsible. I don’t need to validate this externally by force things upon myself that then give me that recognition as one thing or another. I need to look within and trust, first.

Sometimes it becomes a problem of learning to strike a balance between being able to operate in this world in its current state as well as pursue joy and happiness. For many years I used to think that I wanted to throw away society and live as a hermit. While this would definitely take away a lot of the noise and expectations that come with living as a member of society, it’s not really necessary.

The current state of things are as they should be, because the human-created world as it is in this moment (society, culture, events, etc) is a reflection of humans’ state of collective consciousness. Everything is an energy exchange, and the universe is consistently responding to what we’re putting out there. Many of us just do not know this yet. We are reacting, not yet understanding how energy works, what energy is, or the fact that we have greater control in general than we think we do. The key is in recognizing this and not feeling enslaved by it.

Instead of resorting to being a hermit, we can use money, our systems, and so on without really being caught up in the system. Because it’s our minds we are freeing, not anything else. Everything starts from within first.

“Should is an ordinary, everyday word — except when it is used to indicate an order that may not be refused. Then should becomes a finger waving under the nose. …”Should” users build prison cells for themselves. They are so focused on what they should do — that they cannot think about what they can do, what they might do in the future.”
— Dr. Arthur Freeman and Rose Dewolf

“Many of us have been taught to do our duty. What does this imply to you? For me, ‘doing my duty’ means doing something I really don’t want to do. My heart’s not in it, and so the energy for the act isn’t there. I have to force every move. Usually, there’s underlying resentment. When this is the scenario, tasks may get done but there’s no gift to the world.

We do not truly serve the world if we give to others but neglect our own truth and our own needs. It’s only when our own needs are fully met that we can generously and whole-heartedly give of ourselves. It’s not selfish to look after ourselves — it’s essential!”
— Source: Higher Awareness E-Newsletter, John & Patrice Robson

“To serve is beautiful, but only if it is done with joy and a whole heart.”
— Pearl S. Buck