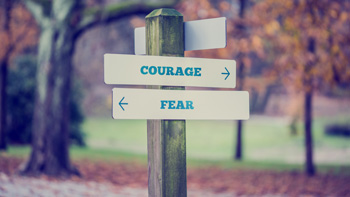 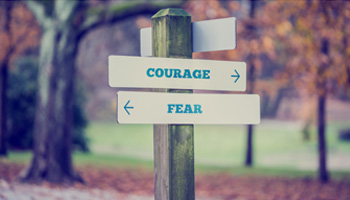 I like to write about fear because so many of us are riddled with it in a myriad of different ways. Often we just push it aside or barely are aware that it’s there, lurking behind our actions. Here’s a quote I received in my email inbox from a newsletter recently that falls in this subject:

“Thinking about interior peace destroys interior peace. The patient who constantly feels his pulse is not getting any better.” — Hubert van Zeller

That’s a good quote for the hypochondriacs. Does this sound like you? I’ll tell you it certainly sounds like me! At any rate, I don’t know if this is correlated to my going off of Prozac about a year ago now (after being on it for about ten years), but recently I hit a time in my life where I felt I had so much fear over things that haven’t happened yet.

Not necessarily your paranoid, hypochondriac-fueled fear (although there was that, too), but fear over things like loss, and change. These are normal things to feel fear about — such as the loss of a loved one, fear of the unknown (that’s a big one for me), and especially fear that stems from the feeling of loss of control.  But, it was strange because it was such a subtle feeling that was just always sitting with me in the background, and I don’t know what triggered it, if anything.

I kept telling people I’d talk to, such as my best friend and people in my family, and I’d say “I just have so much fear. I don’t know why.” One of them said, “well at least you are aware of it and addressing it now.” While I agreed I was aware of it, I wasn’t sure I was necessarily addressing it just by acknowledging it, but I was hoping that it’d go away on its own. I did know that much of the fear was a general feeling out of control; as though acknowledging my place as a tiny pawn in the universe, and the universe could pull me any direction it wanted without me being able to do anything.

Fast forward til a month or two ago, and I was faced with a situation that made some of my fears feel more real. As though some of what I had feared was about to come to fruition, but it hadn’t quite yet. It was more like just a threat. But it made me take on the experience and contemplate it entirely; almost make myself live the reality of it in a sense (my brain off Prozac is good at putting myself in situations and living them out as though they were actually happening).

What this did for me though, was put me in a place where I had to actively deal with my fear. I had to think about it and come to terms with it. To practice letting go. I meditated on just that idea. I pictured myself being released into the vastness of space, over and over again. I also contemplated on the situation at hand and what I had feared for a few days, and then one night for a number of hours. I ended up crying really hard during this time, but it felt like such a release.

Ever since then, I’ve felt no “in the background” fears like I did before, whatsoever. Like it all disappeared. I suppose the key was realizing that it wasn’t one specific fear I had, but a general fear that manifested through many different things.

If you’re experiencing something similar, try meditating on letting go, and meditate in such a way that works for you. If you aren’t used to meditating or haven’t done it before, you don’t really need to do anything special. What’s important is getting in the mental time every day to deal with your issues. Just pushing them aside will only make it worse.