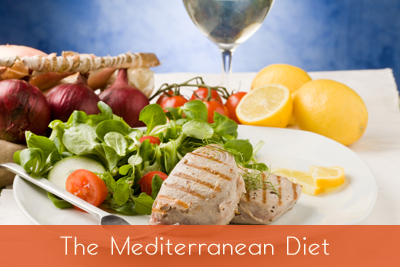 There’s lots to be said about the Mediterranean diet, but researchers are finding out that it’s more powerful than they had anticipated as far as being beneficial for your health.

One of the things I’ve recently read in a Time Magazine issue is that researchers at the U of Alabama and the U of Athens in Greece tracked more than 17,000 African-American and Caucasian men and women for four years and found that those who closely followed a Mediterranean diet were 13% less likely to develop memory and thinking problems than other participants.

An earlier study found that people who stuck to such a diet were less likely than others to show evidence on an MRI of having had a small stroke.

Researchers agree that no single food is responsible for the health-giving powers of the Mediterranean diet. Instead, the combo of nutrients you get from regularly eating this way is what makes it so special—along with the nutrients you avoid.

One notable study showed that compared with those eating a low-fat diet, people on a high-oil version of the Mediterranean diet had a 30% lower risk of suffering a heart attack or stroke or dying of heart disease.

Information Source: The Diet That Might Save Your Life, by Alexandra Sifferlin, Time Magazine 2013.