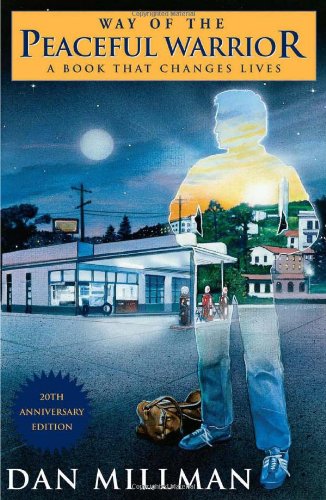 This book has been around a while, and it is by far the best self-help book I’ve ever read. I found out about it in high school from my psychology teacher, who made us purchase and read it in the class. It intrigued me at that time, just enough for me to want to read it again. And I did, now eight times over.

The book goes through the story of a college student and top gymnast who stumbles across a gas station where an old man works the night shift. The old man does enough to introduce the idea to Dan that there may be more to life than what he is currently living, just through his words and actions. The visit to the gas station awakens and triggers something in Dan – but at the time, Dan can’t put his finger on it. The old man ends up becoming Dan’s mentor and spiritual guide.

What’s so great about it is it takes eastern philosophical concepts and presents them in such a way that anybody can relate to. Part of the way it does this is that it doesn’t put the concepts and lessons in the book under any label, except for just general wisdom. This is good because it will allow more people to be receptive to its message instead of the message possibly being tainted by any pre-conceived notions of Eastern philosophies.

On top of that, it’s an easy read, and it’s really funny.

One important thing I learned about it is that at first the book may seem completely far-fetched, if you are new to spirituality and Eastern concepts. The more you learn about yourself and life though, and the more better you develop a spiritual connection, the more truth you see in the book.

For all these reasons and more this book has a special place in my heart!

P.S.–I hate to say it, but I did see the “Way of the Peaceful Warrior” movie too, but I personally don’t think it matches up to the book. It isn’t terrible, but I think all the goodies you can get out of this come from the book and not the movie.