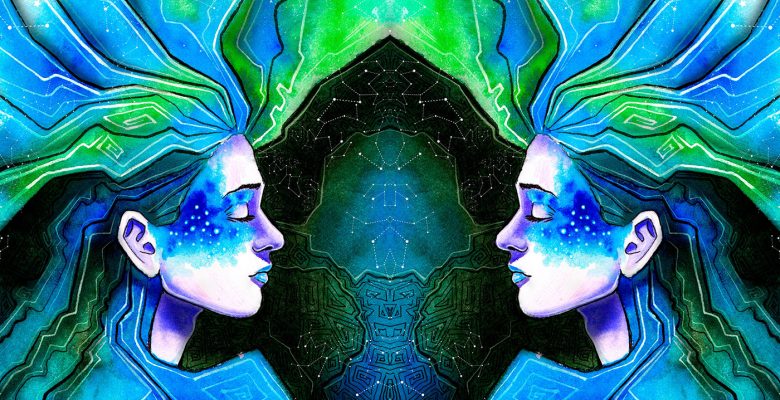 The battle we fight is always within ourselves first, even if others are acting as a catalyst.

I’m so far from perfect, I have my flaws just like anyone else, but my relationships with people over time have served to tamper down my ego by showing me things about myself or triggering things in me I never would have seen otherwise.

I have so far had a few very major events in my life that really made me struggle. One being my anxiety disorder where I had to really get a grip on my mind to not suffer anymore (this took years of practice). Second being one of my “meditation experiences” where it felt like my ego and “soul” for lack of a better term were on a battlefield — the deeper part of me was trying to fly high while the ego was cowering in fear over what was happening. Perhaps close to ego death which can feel like you’re actually throwing yourself over the cliff mentally.

My latest battle came through in connecting with someone in a way I had never experienced despite having other very deep connections before, and it taking me to a level of vulnerability and love in a way that I had never seen.

Love on this level can trigger so much fear, and if you already have past wounds, forget about it. In this case, their past wounds caused pain and for us to have to stop contact altogether.

This made my ego go absolutely crazy. I could not accept that things would go this way for a connection so beautiful, deep, and meaningful that we both felt. As a result I felt as though I lost control of myself entirely.

I couldn’t stop messaging them, and I found myself overcompensating and showing more love and affection in times when they weren’t showing love, effectively throwing things out of balance. I would beat myself up daily over doing it but yet, I couldn’t stop.

As someone who felt like I usually had so much control over myself in this way in relationships and prided myself on being good at letting go — this was EXTREMELY unsettling.

I also found myself trying to teach them things I learned that I felt might help them see things clearly — something that seemed helpful at the time. But I learned this was really just another sign of my ego trying to control the situation.

It has taken me months of pain and reflection to realize what was going on with me internally. That it wasn’t really about them directly, it was how the situation’s dynamics were causing me to react, and I did not have a handle on it.

This showed me there was something for me to learn, and the lessons wouldn’t stop there.

Over a year later, and I still experience bouts of some of the most intense emotional pain over it that I have ever had.

In dealing with the pain, I previously thought I could just push it away like I do with my anxiety: distract myself and with time it’ll lose its power.

I made lots of new friends. I traveled. I did anything to put my attention elsewhere, but to my surprise, that pain was still consistently weighing very heavily on me beneath it all.

When I thought things were going okay for a while — like even a month or two — BAM it would hit me and take me over completely…making me wonder “what the hell is this?”.

It’s been this and the connection itself that showed me this wasn’t just any ordinary love journey I was used to, and it’s so hard to describe this unless you’ve experienced something similar.

And I realized that this pain was serving a purpose that I needed to address. In order to stop the pain, I couldn’t just ignore it anymore.

This is where more lessons begin. The pain nags at you until you learn to figure your shit out. It REALLY won’t let you NOT begin to dig deeper and understand yourself.

I had to start asking myself questions like…what daily thoughts am I holding that are reinforcing the pain? What ideas if any am I holding onto about this situation that is inherently causing it? Is it my attachment to wanting something to happen with one of the most beautiful connections of my life yet now not even being able to talk to them? That was certainly part of it.

And ever since this has been my journey of learning to strike what has felt like a very tricky balance between loving and letting go. How do I continue to love this person and honor the connection without being attached to the outcome — without my ego trying to control it in some way?

How do I learn to keep this level of love while not having the pain? It almost seemed like the two come hand in hand.

My goal has been in this journey to learn to love unconditionally and without fear, and I honestly can’t say I’m there yet, but at least I’m getting closer.

And looking in retrospect, this journey from the time I met them has been something intensely connected with self evolution.

It was never really about what they did to me or how they handled things. Things happened the way they happened for a reason.

I have simply had to learn to move forward and deal with my own stuff amidst some of the strongest things I’ve ever felt, and it was way harder than I would have ever anticipated it to be.

This is me getting used to being vulnerable more often rather than in a state of pride. Being able to not be afraid to sit with the pain, to love without blame, and without the shame weighing on me of how I handled things.

And in some ways, I recognize I’m a different person than I was a year ago because of it. Kind of the way any sort of pain will wear you down over time. I’m more resilient, more humble, less attached, and stronger within myself, and at the end of the day that’s the most important thing.

“Your pain is the breaking of the shell that encloses
your understanding.

Even as the stone of the fruit must break, that its
heart may stand in the sun, so must you know pain.

And could you keep your heart in wonder at the
daily miracles of your life, your pain would not seem
less wondrous than your joy;

And you would accept the seasons of your heart,
even as you have always accepted the seasons that
pass over your fields.

And you would watch with serenity through the
winters of your grief.

Much of your pain is self-chosen.

It is the bitter potion by which the physician within
you heals your sick self.

Therefore trust the physician, and drink his remedy
in silence and tranquility.”
—Kahlil Gibran, “On Pain”